Willebrord Snel (1580–1626) Netherlands. "Although he discovered the law of refraction, a basis of modern geometric optics, in 1621, he did not publish it and only in 1703 did it become known when Huygens published Snell's law in Dioptrica." Snell also studied navigation and proposed the method of triangulation, which is the foundation of geodesy (the branch of mathematics dealing with the measurement of features on the Earth). For some reason, the law named after the man is spelled incorrectly. Snel the man vs. Snell the law.

"This form of Snell's law was actually published by René Descartes (1596–1650) France in La Dioptrique (1637). Snell did discover the relationship but articulated it in a different way. Today it is the form used by Descartes that is called Snell's law."

The index of refraction.

The index of refraction is somewhat related to density, as one would expect. This graph is for transparent minerals. Someone should make one for liquids and see what happens.

Don't go in the water.

light traveling from a slow medium to a fast medium

Dispersion is generally highest in solids and lowest in gases.

Dispersion is often measured in terms of the coefficient of dispersion, which is defined as the difference between the refractive indices for for two prominent lines in the spectrum of hydrogen — the blue F line at 486.1 nm and the red C line at 656.3 nm.

Another common measure of dispersion is the dispersive power.

where nD is the index of refraction for the yellow D line of sodium at 589.0 nm.

Use of a single number to quantify dispersion is rather misleading. Index and wavelength are not linearly related. Dispersion is best quantified as the rate of change of index of refraction with wavelength.

For most transparent materials, a graph of index versus wavelength is curve with a few general characteristics.

Calcite is a common, transparent mineral. It can be found throughout the world, but some of the best samples were originally found in Iceland. Pieces of this mineral are easily split (or cleaved as the geologists say) into parallelogram-faced prismatic chunks. Nonmetallic minerals that cleave easily were called spar in German and so calcite is sometimes also known as Iceland spar. It is of little economic importance by itself (although it is a component of limestone, which is used to make cement), but is of some scientific importance. It has been known for several centuries that light transmitted through calcite takes two paths. This can best be seen by laying a large crystal of it on a page of text. Every letter can be seen twice. This phenomenon is known as double refraction or birefringence. 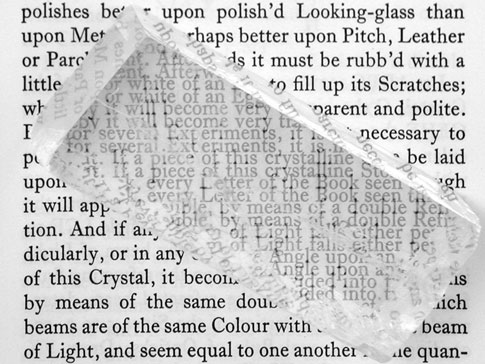 A ray of light incident on a doubly refractive or birefringent material divides into two rays: an ordinary ray (or o ray or ω [omega] ray) and an extraordinary ray (or e ray or ε [epsilon] ray). As the name implies, the o ray behaves in an "ordinary" way, following Snell's law without a problem. The ratio of the sine of the angle of incidence to the sine of the angle of ordinary refraction is a constant. The e ray gets its name because it does not obey this rule.

Birefringence is only a property of solids

When the incident angle is just right, the o and e rays will follow the same path and the birefringence cannot be seen geometrically. At all other angles, the the two rays will follow different paths. Thus, the index of refraction for extraordinary rays is also a continuous function of direction. The index of refraction for the ordinary ray is constant and is independent of direction

The measure of birefringence (δ) [delta] is the difference between the indices of refraction of the two rays.

In some materials (like calcite) ne < no and the birefringence is less than zero (that is, the e ray is refracted less than the o ray) and the material is said to be optically negative. In other materials (like quartz) the reverse is true and these materials are said to be optically positive. Materials that do not show birefringence are said to be isotropic (like diamond); that is, they behave the same no mater what the alignment of the crystal is relative to the incident ray.